Welcome to Dispatches from the Firebees! This is my first dispatch, so I will probably keep it brief, but I wanted to start getting something out there. I waited in a long line at the post office today to get a PO box for this, so I hope it is worth it.

I am starting up this little dispatch to help fill some of the void left behind when I withdrew from twitter. This medium will not be as instant, but I think the benefit of some breathing room and enough characters for nuance will make up for it. I will still write longer pieces on my blog, but this place will collect the shorter thoughts and link sharing that once lived on twitter.

I hope to publish weekly on Fridays, but it may shift by a day or so when I’m very busy.

To clarify my “leaving” twitter, I am withdrawing from using it as an active place I contribute content and engage with others. It is not a good place to reach me. However, I will continue to use it sparingly for the following uses:

One of the reasons, I decided to withdraw from Twitter was the heavy amounts of harassment and the company’s clear disinterest in doing something about it despite repeated requests from their users. Very little came from them in response to the #AskCostolo hashtag campaign, but this week a celebrity was harassed and suddenly they claim they will step up. I’ll believe it when I see it. ::rolls eyes::

Some people try to excuse Twitter’s lack of harassment protections as a difficult computer science problem. I agree that using natural language processing or other complex analytics to identify harassment can be quite difficult. However, there are things they can do that are reasonable programming tasks. I doubt they are trivial, but the company has plenty of staff and could spend time on these features if they thought it was important. Here are two of my big feature requests for twitter. Maybe if they implemented these, I would consider returning.

Did you know that the firebees have their own site now? They do! Firebe.es is the home for my random weird drawings and firebee comics. This is my first time really doing art in 10 years, so try to be kind. I swear it will improve with time. 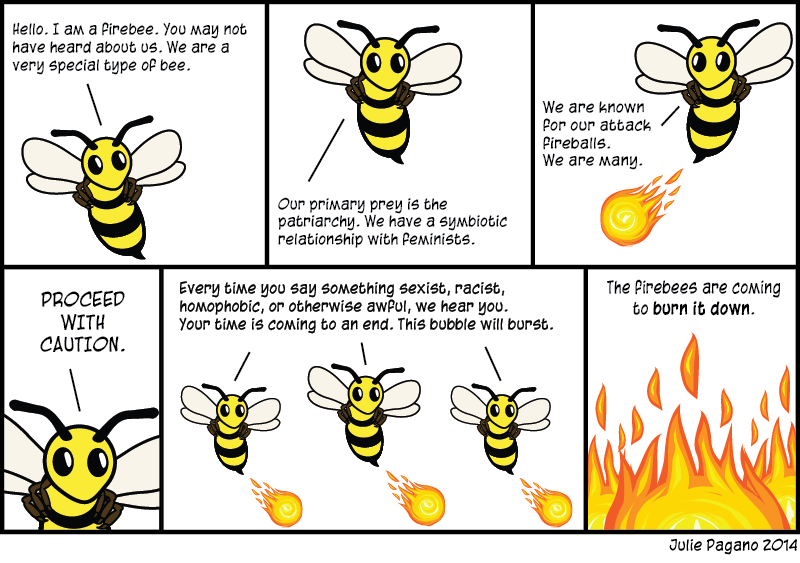 P.S. There is swag if you have a craving for a firebee sticker. I am hoping to design some tshirts soon.